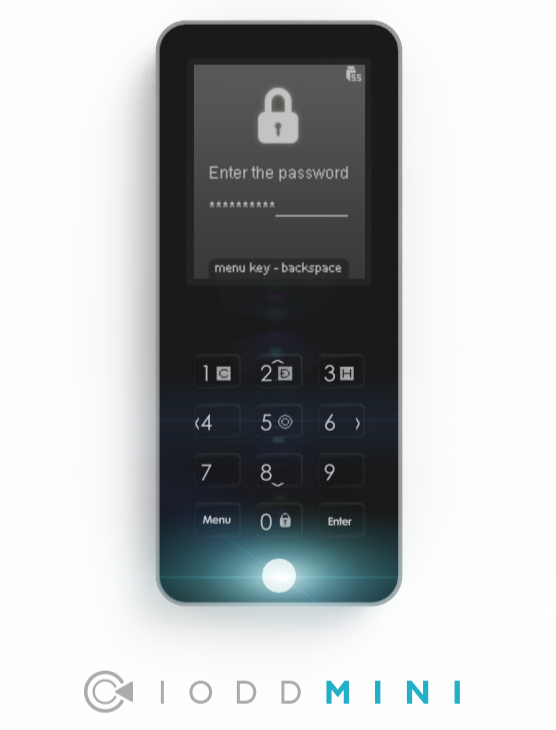 Mount an ISO file to replace your ODD - bootable. Replace your Optical Drive with USB 3.0 at speeds up to 250 MB/s.

THANK YOU! for your customer reviews on Amazon

User Phil gives us 5 out of 5 stars and writes:
Must-have for IT specialists
Preface:
I came across the iodd drives/enclosures some time ago and was excited by the idea of drive emulation (more on that later). For a while, the predecessor models were also distributed by the well-known (and now insolvent) manufacturer Zalman with modified firmware. Since I couldn't get any of the cheap Zalman cases (certain models could be flashed back to the iodd firmware), I ordered an IODD-2541. This is a case that can hold a 2.5" HDD or SDD. I liked the drive, but the size bothered me. Shortly after, I learned about the iodd Mini (this product), which was crowdfunded. The bulky IODD-2541 went back and an iodd Mini was needed.
Easier said than done, because the part is currently (early/mid 2020) hard to get. Also the old IODD-2541 was sold out in the meantime. So if you want such a part, you should buy it quickly. I was close to importing the drive from the USA or GB.
At some point it happened and I could actually order an iodd Mini. But only with 256GB instead of the 512GB I wanted. A variant with 1TB also exists.

But what exactly makes the drive so special?

1. the SSD:
Compared to a conventional external hard drive, a compact and fast SSD (Solid State Disk) is installed in the case. To be precise, it's an M.2 2242 NGFF = M.2 connector; SATA interface, 42mm length. The SSD is labeled iodd, but the layout seems to be SSDs that are sold at the "ALI um die EXcke" ;) under the name WEIJINTO or Goldenfir. Thus, the SSD should also be exchangeable for one with more capacity. According to research, the SSD shouldn't use more than 2 watts. However, I doubt whether this information is correct. The better known SSD manufacturer Kingspec already states 3.43 W for its 512GB SSD, and even 3.85W for 1TB. I could not find any wattage data for the 1TB SSDs from WEIJINTO/Goldenfir.
But I will order a 1TB SSD and install it in the case (Attention loss of warranty!) and give an update here. The current 256GB SSD comes then in a cheap external housing. Thus, I'm a lot cheaper off than if I had bought the 1TB variant right away and still have an additional external SSD.
Since iodd does not offer a 2TB, I would not recommend installing one. A Reddit user has already tried this with a KingSpec SSD and has problems with it.

2. drive emulation:
Administrators and IT technicians know this: You have to install something (Windows/Linux...) or check something but you don't have the right CD or USB stick at hand. The iodd Mini allows to mount (insert) drive images (so called ISO files) which are stored on it into a virtual optical drive and also to boot from it (BIOS and UEFI). There are tools like YUMI, with which one writes several images on a stick and can select over a Bootloader. In practice, however, this solution quickly reaches its limits. Since the iodd Mini emulates an external optical drive and there is no additional boot loader, the iodd behaves exactly like an external drive with the corresponding CD inserted. The difference is that you can store hundreds of CDs in one device and don't have to carry them around.
It is also possible to create virtual hard disks (VHD) and mount them as well. Unlike ISO files, these VHDs can also be written to. In such a virtual hard disk then e.g. a Windows to go or Linux can be installed.
Of course, the actual SSD is always accessible like a classic external drive. Only then appears just beside the drive letter E: (example) for the contents of the SSD still another drive e.g. F: for the simulated optical drive or the virtual hard disk. I have placed the ISOs in the ISO directory. Over the monochrome TFT LCD display (128x160) can be selected, which ISO and/or VHD is to be mounted. It is also possible to choose the type of mount (as removable or fixed drive) and a write protection can also be activated. The SSD can be formatted in the file system NTFS or extFAT (do not forget to eject with Windows 10 < 1809).

3. encryption:
The SSD can be encrypted with AES256bit-XTS Max. A sequence of digits with a maximum length of 16 characters is possible as the key. This must be entered during startup. The iodd displays a random assignment of the numeric keys. The key 1 is then e.g. the 3 etc.. This prevents that the code can be copied by a third party based on the keystrokes. I think this is good. For fast starting devices, a Y-cable can be used, to which a powerbank has been connected for the power supply. The iodd Mini can thus be started, unlocked and configured before the PC.
Those who want to use encryption should set it up first, as this will erase all data stored on the SSD (or back it up beforehand). The encryption can also be deactivated again (again, the data is destroyed).

If you only understand what you're doing, you don't need this part. But if you understood everything, you know how unique this device is and you probably want to have one now ;).

And some general information about the device:
The workmanship is high quality and the design is appealing. The device is surprisingly light.
A protective cover, a robust transport bag (in which also the cable fits!), as well as the connection cable are supplied. The English manual is very concise and assumes corresponding expertise. German is also NOT available as a menu language in the display. An English WIKI (just google iodd Mini Wiki) is available.
The firmware of the device can be updated.

User Tobias1976 gives and 5 out of 5 stars and writes:
Ingenious part!!!!
Apart from the fact that this "USB stick" encrypts all data hardware-based according to the very highest security standards, it can do something that others cannot, namely pretend to the computer (whether Mac or PC) that it is a CD/DVD drive or an external/internal hard drive. ISO and VHD files can be mounted without any problems and without extra software. Ideal to carry e.g. several operating systems quasi "to go" always with you.
The display is not monochrome, as it appears on the photos, but colorful, although not particularly high-resolution. The stick is also extremely small and insanely light, making it ideal for traveling. Additionally, 2 USB cables and a protective case come with the stick, as well as a high quality small pouch. For a USB stick, the price is steep, but in view of the unique features absolutely ok.

User Marlo Maurer gives us 5 out of 5 stars and writes:
High quality IODD product
IODD - How I love it. I am in the IT business and have been juggling around with boot USB sticks for a long time. This little SSD does exactly what it is supposed to do, emulate those very boot sticks as a CD.
On my disks are now about 12 Linux/Windows installation sticks, Hirens Boot CD, Gparted and more. Only Fujitsu Tools don't really want to.

If the hard drive had USB-C, my dream would have come true. But at least the data port is high-quality and does not tend to wobble so far.
The quality does not leave much to be desired. The keys have a good pressure point and the case is stable. Sometimes the menu navigation is a bit confusing, but you can cope with it.

User S-Line gives us 4 out of 5 stars and writes:
Indispensable for admins
The iODD Mini is the successor of the iODD 2531/2541 drives or identical Zalman VE300/VE400.
The functions like booting from ISO/VHD, encrypting, etc. work almost unrestricted on every PC and should not be explained in detail here, because here the Mini doesn't work much different than the predecessor models.
As mentioned, there is little to criticize about the Mini's functionality. Why it only gets 4 stars from me is rather due to the design. Why not use an aluminum case instead of cheap plastic? Especially with the installed M.2, additional cooling would make sense here. The display could also be a bit more valuable. Furthermore, a USB-C would be preferable to a USB 3 Micro-B port in 2020.
Otherwise, it would be nice if there was a version where you could install an M.2 yourself.
Nevertheless, these "shortcomings" are complaining on a high level and the Mini is a great device for admins that simply works.

User marte gives us 4 out of 5 stars and writes:
A brilliant part
I wish I would have had this thing sooner. ISOs raufspielen (good flott, with me about 120 MB / s), select, boot computer from it. VHDs work without problems (under Linux just create them with dd if=/dev/zero ...) and up to three can be used at the same time, and you can even select whether they should be displayed as removable or fixed. Write protection is also possible. The whole thing is completely independent of the operating system. Great.
Usability takes some getting used to, but it's doable. It's a pity that there is no battery to select without computer, would have put the crown on the part. The part is simply the ultimate USB stick. Or actually any number of them.
4 stars because of the lousy display from the last millennium. The device deserved a nice, sharp OLED.

By selecting "Accept all", you give us permission to use the following services on our website: YouTube, Vimeo, ReCaptcha, Google Tracking, Sendinblue. You can change the settings at any time (fingerprint icon in the bottom left corner). For further details, please see Individual configuration and our Privacy notice.

The settings you specify here are stored in the "local storage" of your device. The settings will be remembered for the next time you visit our online shop. You can change these settings at any time (fingerprint icon in the bottom left corner).

To view Vimeo contents on this website, you need to consent to the transfer of data and storage of third-party cookies by Vimeo.. This allows us to improve your user experience and to make our website better and more interesting. Without your consent, no data will be transferred to Vimeo. However, you will also not be able to use the Vimdeo services on this website.

To send data to Google, you need to consent to the transfer of data and storage of third-party cookies by Google.. This allows us to improve your user experience and to make our website better and more interesting.

To send data to sendinblue, you need to consent to the transfer of data and storage of third-party cookies by sendinblue. This allows us to improve your user experience and to make our website better and more interesting.

Would you like to see these contents? Activate the desired contents for one session only or allow the website to remember these settings. Once you have given your consent, the third-party data can be loaded. For this, third-party cookies might be stored on your device. You can change these settings at any time (fingerprint icon in the bottom left corner). For further details, please see the Privacy notice.